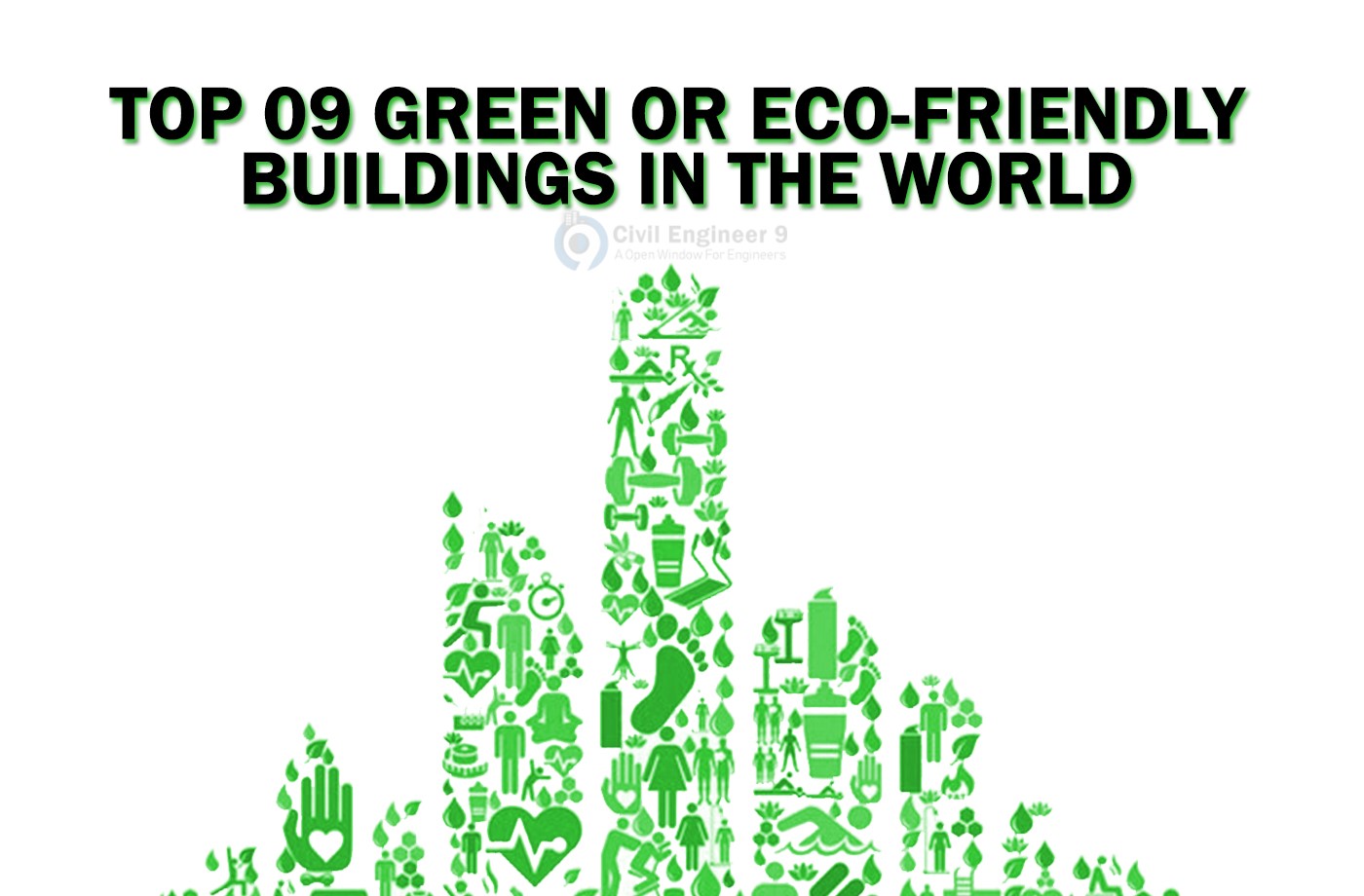 Top 09 green or Eco-friendly buildings in the world

In a simple definition, green building is the environmentally and eco-friendly conscious construction and operation of buildings. For many good reasons, nowadays green building features and environmentally friendly construction is becoming more common.  Based on our online research we are going to share the best examples of green and eco-friendly buildings around the world.

If you are interested to learn more about what is green building you can read more about Self-sustaining homes and Autonomous buildings or Top 9 Tallest Building in the World.

Dubai is the home of world records such as Burj Khalifa the highest skyscraper in the world and the biggest fireworks display. In the year 2013, Dubai revealed The Change Initiative, a commercial building that received 107 out of 110 points in green building points. It makes to the most sustainable building in the world. It broke the record of The Pixel Building in Australia with 105 points.

The Hyperion Blocks of New Delhi is currently under construction, it supposes to finish in 2020. It is fully functioning and sustainable tower blocks that have an energy output greater than what they’ll actually use. It is designed by the Paris architect Vincent Callebaut. He was inspired by the tall Hyperion trees of California. It is 36 stories high, this complex will include farms, homes, gyms, restaurants, and more like a veritable ecosystem of urban ecology. The Hyperion towers are designed to take advantage of air real estate but also to create a community of ecological consciousness.

Every time Australians proved that they are walking towards the world of sustainable development and eco-friendly architectures. The Pixel Building in Melbourne shows what Australia is capable of. The pixel building is the first ever building to achieve to perfect Green Star score. The fact that it is 100% carbon-free which means that carbon can produce annually in running the building was compensated by renewable energy; this is what makes the Pixel Building stand out of the rest of the world. The building also boasts of a systematic method called carbon neutrality, this process enables the offset the carbon contained in the materials used in constructing the building.

The Technical University of Singapore is a perfect example of ecological architecture that is both environmentally friendly and beautiful. This building is 5 stories high with an abundance of glass windows. The effect is highly energy efficient because the building is designed in a swirling semi-circle and minimizes heat loss. Buildings roofs themselves of this building are entirely green. The green Lawns completely carpet the tops of the building, blending urban and rural landscapes. But they aren’t just there to be pretty, these lawns serve as gathering spaces, insulation, and sustainable ecosystems for the entire building.

One of the leading and top-most companies in the United Kingdom Siemens has built The Crystal, an urban sustainable landmark that draws thousands of visitors every year. Besides its beautiful structural design, The Crystal building is one of the greenest buildings ever built by mankind. This building uses natural light entirely during the day. It also includes smart lighting technology, wherein electricity is mainly powered by photovoltaic solar panels. The Crystal building is illuminated by an integration of LED and fluorescent lights which are switched on and off depending on the bulk of daylight present.

ACROS Fukuoka Foundation Building considered being a top attraction in Fukuoka, Japan.  ACROS Fukuoka Foundation Building was opened in April 1995 and a good example of the perfect fusion of native greenery and architectural concept. Its often referred to as eco-friendly architecture. That its interior design includes unique features a colossal atrium, immersing the entire space with natural lighting thus saving a lot from energy consumption what makes this building a sustainable one. Similar to a mountain, the distinctive feature of this building is a systematized design of water drainage. The water drain method allows natural irrigation to take place as water flows from the top of the building and further waters the surrounding vegetation on the way down.

The Bahrain World Trade Center (BWTC) is a 50-story, twin tower complex that was built in 2008 by the world top renowned architectural firm the Atkins. Bahrain World Trade Center is set to conquer the world as it is the first ever skyscraper in the world to have incorporated wind turbines into its blueprint. The two-tower complex is interconnected by three sky bridges, each of which is holding 225 kW wind turbines. These turbines supply up to 15% of the twin towers need, in other words, which helps in producing renewable the building’s energy consumption and carbon discharge.

The first ever building to be awarded the Six Green Star Rating was The Council House 2 in Melbourne, Australia. Council House 2 has features that include gas-fired cogeneration plants that reduce carbon emissions, 85% reduction in energy consumption by 48m2 of solar panel installation and lighting technology like T5 type.